That Is Not Dead 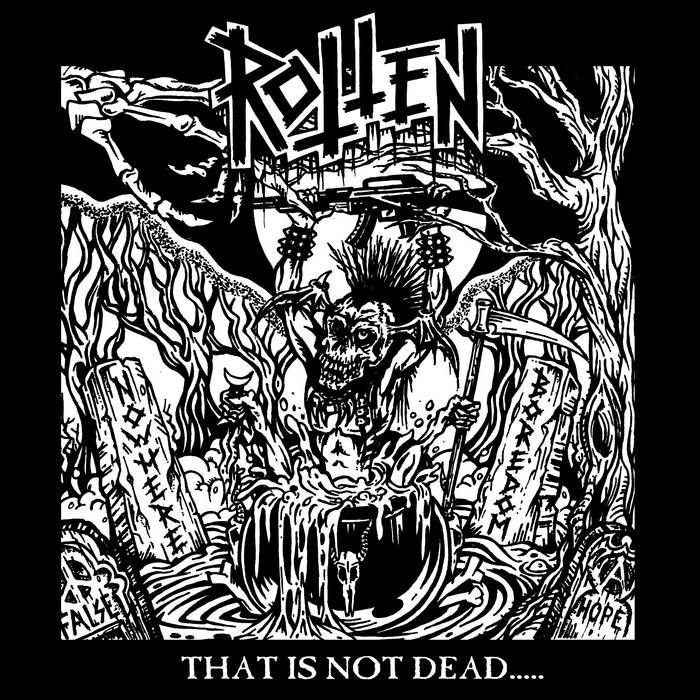 HELLS HEADBANGERS is proud to present the highly anticipated debut album of ROTTEN UK, That Is Not Dead. Although pure punk rock is a rarity on HELLS HEADBANGERS, the form ROTTEN UK play - and proceed to uniquely twist to their own design - is actually a variety that inspired many early speed metal and thrash bands: commonly known as UK82, this subgenre was indeed a strain of early '80s UK punk that synthesized the anthemic Oi! style before it with the nascent harder/faster style pioneered by the likes of Discharge, The Exploited, and GBH. With other stated influences that include early Finnish legends like Kaaos and Riistetyt as well as England's Disorder and Broken Bones, ROTTEN UK almost effortlessly create a 14-song whirlwind of dark 'n' desperate ANTHEMS with That Is Not Dead.

The strength of songwriting here is startlingly developed; for music that's usually derided as simplistic and even talentless, ROTTEN UK's vision of punk is a highly dynamic and nuanced one. A good deal of that stems from a gloomy current of anarcho-punk running throughout the record which, when combined with the frequently tribal but always propulsive drumming, lends That Is Not Dead a certain shadowy air of early deathrock. But despite all of the band's musical DNA being rooted in the early '80s, let it be known that ROTTEN UK are no trendy bandwagon-jumpers: prior to this debut album, since 2011, the quartet have released four 7" EPs and nearly as many tapes, staunchly committed to the DIY aesthetic and truly living it.

Now, with the full backing of HELLS HEADBANGERS - who were immediately impressed with the recording the band presented them - ROTTEN UK are poised to make converts on both sides of the punk/metal divide. That Is Not Dead? Indeed, punk is very much alive with with ROTTEN UK!

ROTTEN UK biography
It’s a fact that there's still lost eldritch underground sounds of the '80s still being resurrected from the darkest crypts, and ROTTEN UK are one of those spectres that proves this: bursting from the coffin, summoned to this age to remind us that the impending dooms that we have been warned about in past times are right here, now banging on our doorsteps. With massive influences culled from almost all anti-authoritarian genres of the '80s, they stir a cauldron of Dickens-esque UK82, anarcho-punk, post-punk, hardcore, deathrock, and heavy metal, creating a sound that is as much a dead fetus in the womb as it is a ghost in chains. Melding together Lovecraftian and occult mysticism with sociopolitical commentaries and cries of revolution in an age that is seeped in blind-eyed madness constantly on the verge of doomsday, these vamps come spitting, smashing, bleeding, and frothing, haunting your turntables and clubs only for their own sheer bemusement, calling out the hypocritical zombies of today in hopes that maybe, just maybe, all us outcast scum will get a mild bit of enlightenment before the chaos fully engulfs us.

Emerging from a portal somewhere that links the industrial necropolises of Rochester, England and Rochester, NY whilst defying time between 1982 and 2016, ROTTEN UK have been terrorizing the colonial states for the past five years with their own special breed of revolution-inspired Lovecraftian punk, summoning the reaper and pleading the old gods to tear down the walls of our modern institutions, religions, and governments, balancing haunting melodies with venomous aggression. Their call for the outcasts of this world to wake up and seize the day before we meet extinction is bleeding out of their music: a throwback to the underground sounds of the '80s that they refuse to leave buried in the tombs.

Haunting Satanic punk from Rochester NY featuring ex-BLUDWULF vocalist Reverend James Von Sinn (AKA Sinn Vicious), this four-piece has been playing for the past five years, spreading their own brand of old-school anarchy and chaos mixed with nightmare-gothic leanings. With a bunch of successful, fast-selling self-released 7"s and demos along with rabid shows ending in bloodied fists and broken glass, these unruly bastards quickly earned a reputation up and down the American East Coast, in Canada, and Europe as spooky, snarling rock 'n' roll bad-boys the likes of which have not been seen since the days of the Sex Pistols, Stooges, and Dead Boys but with more venomous, evil, and sadistic tendencies! These cretins are a dying breed, yet a call to a new age of true magic and revolution!

Bandcamp Daily  your guide to the world of Bandcamp